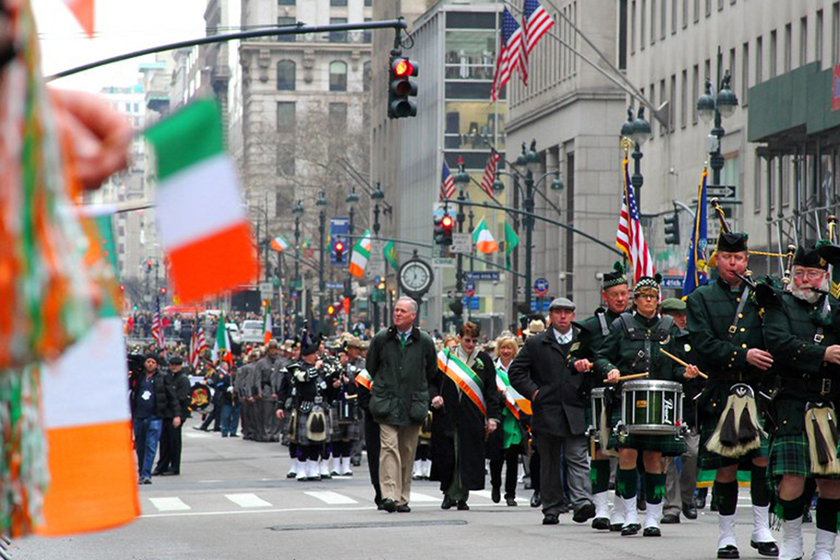 Fun Things to Do on St. Patrick's Day in Boston

Lively Things to Do on St. Patrick's Day in Boston

An Irish stronghold for hundreds of years, Boston celebrates St. Patrick's Day like no place else on earth. People of Irish descent make up the largest ethnic group in Boston and have left their mark throughout the city, especially in neighborhoods like South Boston and Charlestown. The Irish have been in Boston since the first colonists arrived, with huge waves of immigrants following during the 19th century and the Great Irish Famine. Today, the city's Irish heritage is alive and well – and March is the perfect time to experience it for yourself. Discover all kinds of fun things to do on St. Patrick's Day in Boston, from blowout parades to pub parties and cultural activities.

Put yourself in the lively green heart of Boston at Revere Hotel Boston Common, a rebellious boutique retreat for intrepid adventurers, urban pioneers, and free-spirited trailblazers. Situated steps away from Boston Common and the Theatre District, our unique hotel is perfect for enjoying all of the incredible things to do on St. Patrick's Day in Boston. With easy access to public transportation, you can travel around the city quickly. After your adventures, return to a locally-inspired oasis and experience the city at its best – from authentic New England cuisine at Rebel's Guild restaurant to handcrafted cocktails at our rustic-chic lobby bar. Create your own adventure in the Capital of Irish America on a St. Patrick's Day getaway to Boston.

Cheer at the St. Patrick's Day Parade in South Boston on March 15

While you'll find numerous St. Patrick's Day parades around the city, the one not to miss is the parade in South Boston. Kicking off at 1:00 p.m. on Sunday, March 15, Boston's renowned St. Patrick's Day Parade is one of the biggest events of the year. It begins at the Broadway T Station and ends at Andrew Square, traveling along Telegraph Street and Dorchester Street. Anywhere along Broadway is a good place to catch the action, as are the hills of Medal of Honor Park. Cheer for the colorful floats, bombastic marching bands, and bagpipe groups. Revel in the luck of the Irish.

Explore the Irish Heritage Trail on a Guided Walk Through History

Step into the past on a guided tour through 200 years of Irish history in the city of Boston. The Boston Irish Tourism Association offers guided walks of the city's Irish Heritage Trail every March. Discover how the Irish have made their mark on the city's culture and character, from Commodore John Barry to President John F. Kennedy. Comprised of 20 unique sites, the Irish Heritage Trail illuminates the stories of famous Irish-American artists, politicians, and leaders. Guided tours last 75-90 minutes, or you can also pick up a self-guided tour map at the Boston Common Visitor Information Center (located at 139 Tremont Street). Sites on the Irish Heritage Trail include:

Get an early start to the rabble-rousing at Harpoon Brewery, which hosts a two-day St. Patrick's Day Festival on the first Friday and Saturday of March every year. It's a great way to spread out the fun and prepare yourself for the following weekend of revelry. The festival features thousands of revelers under heated tents, live music for two days straight, and plenty of Harpoon beer. Try new brews and seasonal beers at this beloved local hangout.

There's no shortage of convivial Irish pubs in Boston where you can raise a glass of Guinness or Irish whiskey to celebrate St. Patrick's Day! You'll also find specials on drinks and Irish cuisine throughout the city, from corned beef and cabbage to brown bread and Irish stew. Whether you're looking for a casual neighborhood tavern or a boisterous sports lounge, discover endless options for revelry on St. Patrick's Day weekend and year-round in Boston:

The sound of Boston is the sound of Dropkick Murphys for many music fans, and this Irish-influenced punk band plays a smattering of shows each March to celebrate St. Patrick's Day. Their fervent fanbase comes out for the parties, along with casual listeners, tourists, and locals who just want to have fun. This year, Dropkick Murphys will play five shows from March 13 through 17 at three different venues in Boston: Encore Boston Harbor, House of Blues, and Big Night Live.