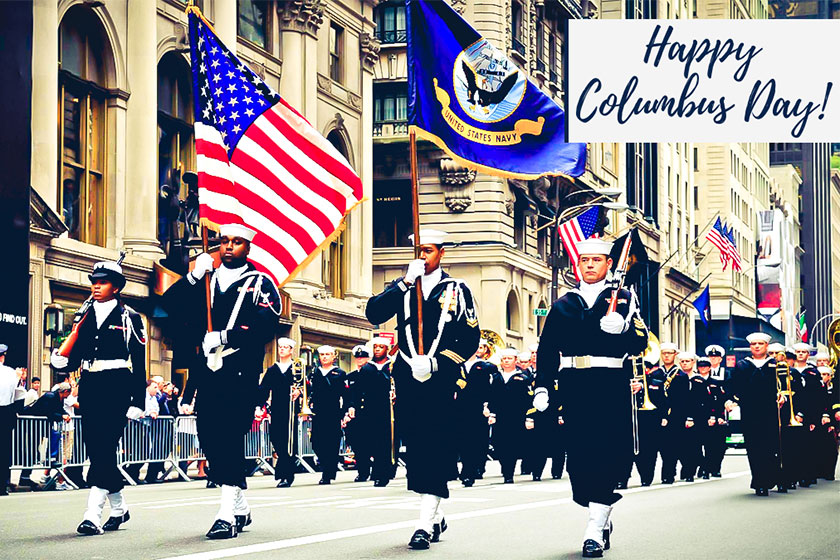 Fun Things to Do in Boston on Columbus Day Weekend

Discover Festive Things to Do in Boston on Columbus Day Weekend

If you're visiting the city on or around Columbus Day Weekend, you'll notice that Boston does the holiday very differently than other places - we go all out. Unlike most other states, Columbus Day in Massachusetts is an official holiday, and it's a huge celebration in Boston. That's because Columbus Day isn't just about the guy who "discovered" the New World here - it's also about the city's rich Italian heritage and the contribution of the Massachusetts military to the fight for American freedom. And with most people off work, it's a high-spirited celebration with special events and things to do in Boston all weekend long.

Witness a true spectacle on October 13 as Boston's famous Columbus Day Parade rolls through the city, delighting young and old alike. It's an entertaining, eclectic procession of marching bands, Italian-American organizations, military units (including Colonial militias), classic cars, decorated floats, and celebrities. In 2019 (and in other odd-numbered years), the parade will begin at Boston City Hall Plaza and then travel to the North End along Congress Street, State Street, and the Rose Kennedy Greenway; then it moves down Atlantic Avenue, Hanover Street, and Endicott Street. Finally the parade loops back to Hanover Street. The parade starts at 1:00 p.m. and lasts about two hours.

Raise Your Glass & Dance in the Streets at Harvard Square Oktoberfest

Move and shake with the locals at this free-wheeling celebration, which is one of the most popular autumn festivals in the Boston area. Now in its 41st year, the Harvard Square Oktoberfest will take place on Sunday, October 13 from noon to 6:00 p.m. Taking over the streets in and around Cambridge's main hub, the festival features six different beer gardens and multiple outdoor stages with live music (plus roving musicians). Shopping is also one of the main attractions at Harvard Square Oktoberfest, and you'll find an enormous selection of just about everything: fine art, handicrafts, vintage items, gourmet foods, gifts, and only-in-Boston souvenirs. Indulge in international cuisine from dozens of vendors and dance in the streets at this very popular event - over 200,000 people showed up last year.

Reclaim the Streets at the Irreverent HONK! Festival of Activist Bands

The funky HONK! Parade is part of the Harvard Square Oktoberfest but truly an event unto itself. Part music concert and part social activism, the parade rolls into Harvard Square from Davis Square around 1:00 p.m. on October 13. With a goal to reclaim the city's streets for horns, bikes, and feet, the HONK! Parade delivers a slew of brass bands and marching musicians. This particular event is just one of many in the HONK! Festival of Activist Bands, which takes place throughout Columbus Day Weekend from October 11-13.

Whether you want to rock out at an electrifying concert, catch the latest Broadway hit, or cheer for the home team at a high-stakes pro sports game - you will definitely be entertained in Boston. Three major sports teams are playing over the weekend, including the Boston Bruins hockey team's opening game at TD Garden. You can also watch the New England Patriots on the field at Gillette Stadium and the Boston Celtics preseason action at TD Garden. Prefer the arts? Check out huge touring acts like Bon Iver, The Black Keys, and Carrie Underwood. Plan the ultimate night on the town at one of these Boston events on Columbus Day Weekend:


Get Cultured at Fenway's Opening Our Doors Festival

Do you want to experience Boston from a new perspective, with female mariachi bands, indoor kite flying, community murals, and a Japanese tea ceremony? Head to the neighborhood around Fenway Park on Monday, October 14 from 10:00 a.m. to 4:00 p.m. Fenway's Opening Our Doors Festival features free performances, activities, and entertainment throughout the neighborhood. Participate in an interactive sculpture and take a historic walking tour. Enjoy martial arts exhibitions, dance performances, and a New Orleans-style parade at this one-of-a-kind celebration.

Embrace the city's pioneering spirit and rebellious attitude at Revere Hotel - and have an adventure like none other. Steps away from Boston Common, our boutique hotel is surrounded by the most interesting neighborhoods, attractions, and things to do in Boston. Experience Columbus Day Weekend like a local and immerse yourself in the vibrant energy of the city.

Next Post
Where to See Fall Foliage in Boston: Things to Do in Autumn

Previous Post
Halloween Things to Do in Boston: Have a Hauntingly Fun Time
Book your stay
Best Rate Guarantee
Back to Top