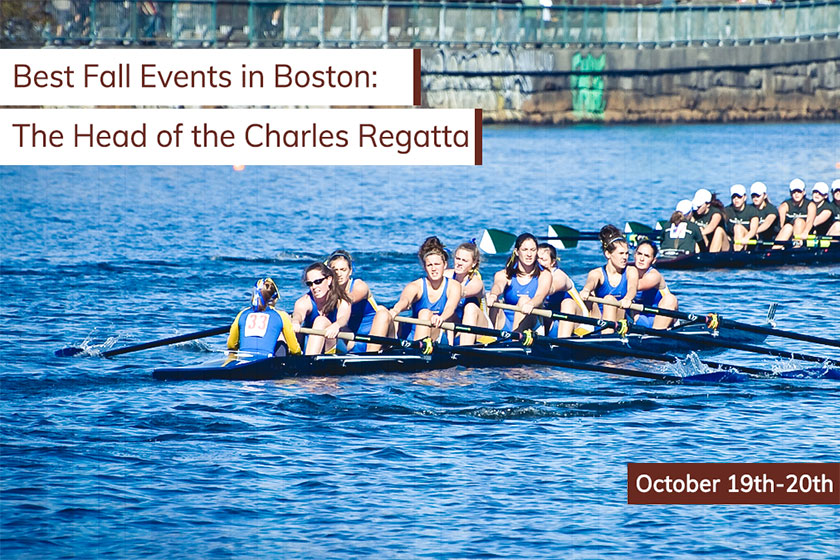 Best Fall Events in Boston: The Head of the Charles Regatta

Posted by: Revere Hotel Boston Common
The Head of the Charles Regatta, One of the Top Events in Boston
Experience true exhilaration as some of the best rowers in the world fight their way to the finish line in captivating, head-to-head races. Welcome to The Head of the Charles Regatta, one of the largest and most important rowing competitions in the world – not to mention quite the party for the fans. On October 19-20, 2019, more than 11,000 athletes will take to the waters of the Charles River, and more than 300,000 spectators cheer them on from the sidelines. First held in 1965, this exciting rowing head competition is now one of the signature events in Boston. The timing of the Head of the Charles Regatta is just perfect for the city's peak fall foliage season, and the brilliant autumn colors along the banks of the river add to the event's massive appeal. Discover all of the details about this year's race and how you can experience the fun for yourself.

Where Is The Head of the Charles Regatta Held?
You'll find all of the action on the Charles River, which separates the cities of Boston and Cambridge. Spectators line both sides of the river along the three-mile course, along with all the nearby bridges in the area. The starting point for the race is situated at the DeWolfe Boathouse near the Boston University bridge and Charles River Basin. The finish line is located just beyond the Eliot Bridge by the Artesani Playground in Brighton, just before Northeastern University's Henderson Boathouse. Numerous events and activities take place in conjunction with the regatta, including open-house parties at boathouses along the river. You can also explore Reunion Village, a social hangout set up between the Anderson and Weeks Bridges for participants, sponsors, and fans. It's easy to find this party zone; just look for the tents.

What Events Are There at The Head of the Charles Regatta?
More than 2,000 boats compete in 61 different events during the weekend with a diverse collection of athletes: men and women, adults and youths, single rowers and eight-person teams, top-ranked Olympic athletes and lightweights. Many teams travel from around the world to compete in the prestigious race. Also called "crew" or "sculling," the sport traces back to Ancient Egypt and was loved by the English settlers who arrived in Boston. It's one of the most important sports at local universities – and an infinite source of rivalry between the Ivy League schools of Yale, Harvard, and Cambridge. During the Head of the Charles Regatta, heats of boats start every 15 minutes on both weekend days from 8:00 a.m. to 4:30 p.m. They compete against each other and against the clock. In general, the most important races take place towards the end of the day on Sunday. Winners receive the honorary title of ‘Head of the Charles.'

Best Places to Watch The Head of the Charles Regatta
With a course that's three miles long, you have plenty of options for viewing the races. In addition to the banks of the river, there are six bridges along the course with excellent views:

Many people prefer the Eliot Bridge and the John W. Weeks Footbridge, which are both located at sharp turns along the course. From these vantage points, you can really see the athletes' skills in action – and collisions happen here more than anywhere else in the race. Eliot Bridge especially has been a site of dangerous confrontations and head-to-head battles, and it's always the most popular (and crowded) place to watch the fun. But the bridges are just the beginning. Also consider watching the race at these hotspots, some of which charge a small fee to enter.

Feel the True Spirit of Boston at Revere Hotel
Steps away from Boston Common and miles away from ordinary, our one-of-a-kind boutique hotel evokes the authentic character and vibrant energy of Boston. Situated 2.7 miles away from the starting line of the Head of the Charles Regatta and the Boston University Bridge, our centrally located retreat puts you right in the heart of the historic city. Immerse yourself in the dynamic culture that makes our hometown unique and enjoy easy access to all of the most exciting events in Boston. Savor delicious craft cocktails and inspiring New England cuisine at Rebel's Guild, our rebellious indie restaurant. Soak in the stunning skyline views from your comfortable room or suite, a true oasis with locally-inspired artwork, luxurious bath amenities, and houndstooth chaise lounges. Explore your passions with a Boston getaway to Revere Hotel and make the city yours.

Previous Post
Where to See Fall Foliage in Boston: Things to Do in Autumn
Book your stay
Best Rate Guarantee
Back to Top